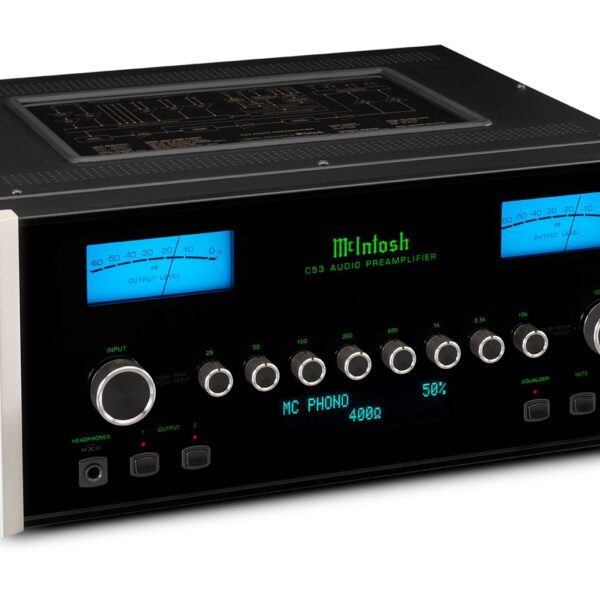 The C53 Preamplifier is ready to serve in your home audio system for many years – even decades – all while delivering unmatched audio quality. Following the digital audio precedent set in our current solid state integrated amplifiers, the C53 stereo preamplifier features an upgradeable digital audio module. But unlike our integrated amplifiers that use our DA1 Digital Audio Module, the C53 is the first to use our new, more advanced DA2 Digital Audio Module.

“Competes with the best I’ve heard despite the complexity of its design… I rate the McIntosh C53 as one of the best preamplifiers I’ve ever heard or used in my system.” Named 2020 Best High-End Stereo Preamplifier. – Secrets of Home Theater and High Fidelity

The DA2 builds upon the DA1 with an expanded set of capabilities. In addition to having all the same connections as the DA1 (2 coaxial, 2 optical, 1 USB and 1 proprietary MCT for use with our MCT series of SACD/CD Transports), a new audio-only HDMI Audio Return Channel (ARC)1 connection is included on the DA2. This allows it to be connected to TVs with a compatible HDMI (ARC) output to bring your TV sound to a new level of audio performance by listening to it through your home stereo system. Popular multi-channel audio formats from Dolby® and DTS® are supported and will be expertly converted to 2-channel audio for proper playback through the C53. When CEC communication is enabled in both the C53 and your TV, your TV remote can control the power and volume of the C53.

The C53 is a “fundamentally well designed, well behaved” preamplifier that offers “fantastic sound quality.” Considering price, build quality and service “the C53 simply checks all boxes and then some” while punching “far ahead of its asking price… Highly recommended, A+++!” – Audiophile Style

McIntosh DA2 Digital Audio Module
Additionally, the DA2’s USB input can support native playback of up to DSD512, surpassing the DSD256 limit of the DA1. This increased DSD playback support is thanks to the next generation, Quad Balanced, 8-channel, 32-bit Digital-to-Analog Converter (DAC) that powers the DA2. This audiophile-grade DAC is highlighted by both an improved dynamic range and total harmonic distortion compared to the DA1. The USB input also supports DXD up to 384kHz. The coax and optical inputs can decode digital music up to 24-bit/192kHz for high resolution audio playback. Rounding out the DA2 is an MCT input that offers a secure, custom DSD connection for playback of the high definition audio found on SACDs when paired with our MCT series of SACD/CD Transports to produce the best possible sound quality from your SACD collection.

“The C53 replaces a whole shelf-full of components by rolling linestage, phonostages, DAC, equalizer, and headphone amp into a single elegant box that, while not small, is hardly large in view of everything it does. I can’t think of another component that manages to do so much so superlatively well, with no compromises in any ways that matter to me as an audio critic and music lover.” – The Absolute Sound

McIntosh C53 Preamplifier
Tone controls include an 8-band analog equalizer; each band can be adjusted ± 12dB so you can fine tune your music just the way you like. Our High Drive Headphone Amplifier can power virtually any pair of headphones, while Headphone Crossfeed Director (HXD®) can bring an added dimension to your music. Home Theater Pass Through lets the C53 be seamlessly integrated into your home theater system. Power Control ports let you easily turn other connected McIntosh components on and off, while the Data Ports can send remote control commands to connected source components.

The C53/MC462 combo sounded “super-smooth and superbly balanced at all times, whilst never letting the smoothness of their delivery interfere with their ability to resolve a level of detail, [which] means you will hear nuances you just will not hear with lesser amplifiers.” – Audio Esoterica

The C53 is one of many McIntosh products to receive Roon Tested designation from Roon Labs. As a Roon Tested partner, McIntosh has provided equipment to Roon for testing with a variety of different operating systems and computers, and shared information about its design and capabilities.

“Its sound is natural and universal. As a preamplifier it is a real titan of possibilities and a representative of high-end sound quality.” Winner of “Highlight of the Year” award. – Hi-Fi i Muzyka

Be the first to review “McIntosh C53 (ON DISPLAY)” Cancel reply